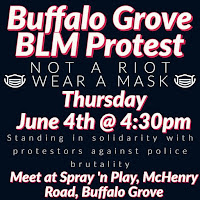 The scenes of the looting and burning in Chicago on Sunday night struck a chord with a group of area students.

They were distraught over the killing of George Floyd, the Minnesota man who died after Derek Chauvin, a now former Minneapolis police officer, held him down by placing his knee on Floyd’s neck.

The students wanted to voice their anger, but knew it was too dangerous to go to Chicago, and even if it wasn’t, the limited access made it difficult at best.

So, they formed Chicago Burbs for Justice to coordinate events for area residents to bring about positive change and justice in the suburbs as well as the city.”

Their first event, a Black Lives Matter protest is at 4:30 p.m. on Thursday, June near the Spray and Play on McHenry Road.

Organizers say “Our plans for Thursday will be geared more towards a moment of grieving for George Floyd and other young men killed by police brutality. We will have our 8 minute and 46 second moment of silence and kneeling in remembrance and we’re currently looking for people of color to share their experiences with institutional discrimination.” The 8 minute and 46 seconds is the length of the video that captured Floyd’s death.

While the Buffalo Grove protest is the first they are coordinating, they are working with groups that are planning protests in other cities including Vernon Hills and Highland Park.  They think it’s important “to reach into suburbs and get people who are passionate about something a chance to have their voices heard,” John Fine, one of the founders says. “When activists get involved, that’s when change happens.”

Fine, who is going into his sophomore year George Washington University, is working with Mark Stul, an incoming sophomore at DePaul University. They are just two members of the group that started Chicago Burbs for Justice.  Other founders include Cameron Oyston, Yoni Leibovitz, Sam Shokodko, Maema Njongmeta, and Sofia Van Opstal.

Fine and Stul are pleased with the response from area residents. The group’s Facebook page has had thousands of likes. They are working on arranging speakers and will also provide the opportunities for participants to share their experiences involving hate.

Fine and Stul say Buffalo Grove village and police officials have been cooperative.

Officials note that the group did not need a permit for the protest as it is exercising their 1st Amendment right to free speech and assembly.

Police officials say they are working not only with Chicago Burbs for Justice, but also with the Park District to “ensure a peaceful event.”

Make a note: Chicago Burbs for Justice notes that Thursday’s event is “Not a Riot; Wear a Mask.”